The Mischief of the Mistletoe 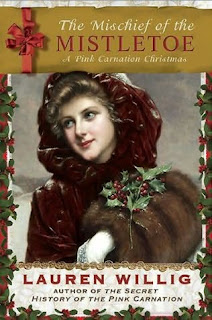 Summary: Arabella Dempsey is in financial straits so she applies for a position at a girls' school where she meets 'Turnip' Fitzhugh, older (wealthy) brother of one of the students.  They stumble on a mysterious note and begin investigating espionage but they also start thinking about romance.

Thoughts: Apparently many people have been asking for a Turnip Fitzhugh story; I was not one of them but I have nothing against a Turnip romance.  I was surprised at how much of a hero Turnip turned out to be-he followed the trope of wealthy man overlooks poor spinster and then is amazed at how he did that because she is in fact so wonderful.  I'm a big fan of that trope and Arabella was a witty, lovely heroine who very much deserved her happy ever after.

I thought the spy denouement was a bit shoehorned in; I had almost forgot about it because I was so wrapped up in the romance.  Of course, all of the novels need to connect to the anti-Napoleon espionage but this one was pretty lame.  It could have worked as a straight romance in the vein of Georgette Heyer without the spying.  I also thought the language was odd and too British. I don't know if that makes sense but it seemed different from the other Pink Carnation novels and not what I expected.  I didn't mind it but I found it a bit overwhelming.

I did miss checking in with Eloise and Colin but there was the brief appearance of Jane Austen so that makes up for it.  Plus at the end there is a list of the other characters and their books, which I found very helpful.

Cover: I don't know about the girl on the cover but I like the ivy surrounding the whole thing.
Posted by The Insouciant Sophisticate at 12:01 AM