The Sorrows of Young Werther 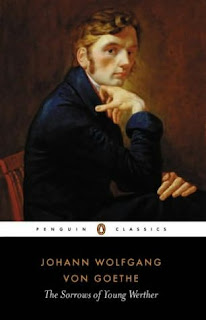 Summary: A young man kills himself after being disappointed in love.

Thoughts: I thought this was so boring.  I kept falling asleep while I was reading it.  The most interesting part was the introduction which explained how part one of the book is based on a real-life experience for Goethe and part two is based on a case where a man killed himself for love.

I think I struggled against his ideal of female perfection, which includes a woman who is acting like a mother to her siblings after the death of their mother (reminded me of Bleak House) and just sounds really boring.  The language was a bit too flowery and I didn't sympathize with Werther falling for a woman who clearly states that she is already involved with another man.

Overall: A short classic that you could read fairly quickly but not my taste at all!

Cover: This isn't my cover as I have an earlier Penguin edition but it fits.
Posted by The Insouciant Sophisticate at 12:01 AM