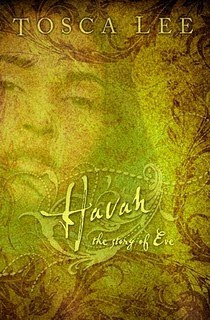 Summary: A look at the story of Eve focusing especially on the time in the Garden and the early years when she birthed and raised her sons Kayin and Heveh and ending with her death.

Thoughts: So there were some things I really liked, some I didn't and some I found confusing.  I will go in order of what I noticed.  First the syntax is odd and the word choice baffling.  It helps illustrate how she and Adam are trying to figure out language and are basically creating it instead of learning it like we do now.  Some of the passages were very descriptive and beautiful and some were just awkward.  The names were also hard for me: Havah=Eve, the Adam=Adam, Kayin=Cain, Heveh=Abel, and I think Shet=Seth.

Second she definitely seems to prefer Kayin, believing he is the child who will redeem humanity (taking a very literal view of the word that her child will provide redemption).  She has dreams that are prophecies/foretellings and thus sees Kayin killing Abel as well as a man being sacrificed (Jesus!)   Through these, she also comes to understand the concept of free will.

The part that made me angry was Adam's betrayal of her about the fruit and how it festers between them.  In much of the middle section, he harbors anger at her and refuses to take in to account his own part.  This bitterness also crops up when he insinuates that the serpent is the father of Kayin (which is apparently part of the tradition but I find it very unfair to Havah).

I know it's what had to happen but hearing about the incest (children sleeping with their siblings and then also kind of being in love with their own parents) was so icky.   Havah also expresses pride at how she continues to bear healthy children unlike her descendants who are bearing sickly children.  Well, that's because they've had to practice incest in order to populate the earth because she and Adam got them kicked out of the Garden!

Overall: Interesting; I like books that take a familiar story and expand and rework it for a more modern interpretation but I didn't love it.

Cover: I'm not really a fan of yellows and browns but those are appropriate colors for the setting.  It's evocative of a garden.
Posted by The Insouciant Sophisticate at 12:01 AM