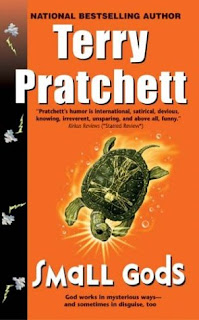 Summary: The god Om is a tortoise and is sustained by the belief of a single man, Brutha.  In order to regain his position, Om must use the simple but good-hearted Brutha to manipulate events and enact real change.

Thoughts: I am so bad at summing up and reviewing Pratchett's novels. They're really good and really funny-what more could one want?  This one had some really good bits, including jabs at religion, philosophy, war-mongerers, etc.  At the beginning, there's a lovely passage about history.

As far as I'm aware the only recurring character to appear is Death.  I'm not sure that Brutha or any of the other characters are in any other Discworld novels. In fact, I'm pretty positive that they aren't which could make this a good first choice to be introduced to Discworld; you don't have to know any backstories although you do have to be prepared for Pratchett's writing style.

Overall: As I said, this could be a good introduction to the series as it's not a series that has to be read in order although that could be interesting too.

Cover: The tortoise is very important to the story.

I thought this completed my challenge but it turns out that I signed up for 6-8 books, not the 1-3 that I thought I  had (I guess I should have checked this earlier).  I don't think I will have time to read three more before the challenge ends but I hope to get at least one more read and reviewed.
Posted by The Insouciant Sophisticate at 12:01 AM