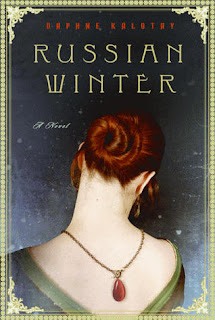 Summary: Nina Revskaya, a former ballerina in the Bolshoi and defector, is preparing to auction off some of her glorious jewelry and thus finally silence the past.  But two people, Drew Brooks from an auction house, and Grigori Solodin, a professor with a mysterious past of his own, won't let the secrets remain unspoken.

Thoughts:  I saw this advertised on goodreads and then saw it at my library so I grabbed it even though I was already reading some other stuff.

It shifts between about 1950s USSR and 2003 New England, USA (References are made to the president's preparing for war and the fact that there's an election the next year).  The historical sections were more gripping to me; I don't know much about the USSR and it was interesting to read about.  I want to know more.  It was disorienting to read a book published this year but set seven years ago although that doesn't matter so much.

The relationships between the characters were okay; I preferred the other areas such as descriptions of the jewelry and the insights in to the working of Soviet Russia (Twice does Nina see Stalin up close) and how people dealt with that (hint: not well).  There are also musings on the importance of art, literature, and love.  Grigori is a professor and friendly with a Hungarian poet who speaks about the latter two at one point.  Nina was married to a poet and had two main friendships with fellow ballerinas and their lovers who do the majority of actions in the historical sections.  Present day is a bringing together of Drew and Grigori to excavate Nina's past, where she remembers betrayals, both real and imagined.

Overall: A slowish book that could be rewarding if you like those kind of stories.  I wanted to love it but I did not.

Cover: I'm not entirely sure why the pendant is on backwards nor why the woman's hair is that color but the colors work nicely together.
Posted by The Insouciant Sophisticate at 12:01 AM