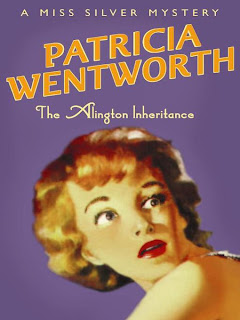 Summary: Jenny Hill has always been content as Jenny Hill; until she finds out that she is actually the natural daughter of her parents and is entitled to be Jenny Forbes and claim a property.  But Mac Forbes, as the current owner of that property who would be supplanted be her, will not let that happen.

Thoughts: I follow Meg Cabot's blog and she recommended the Miss Silver books by Patricia Wentworth for fans of Agatha Christie; well if you skim my archives, you'll see that I am a big fan and I'm currently involved in my own personal challenge to read all of her books so I was interested to give these a try.  I went to my library's catalogue and this was the only book they had so I figured I'd give it a try.

This was not the best introduction to Ms. Wentworth's stories, I hope.  First the murder does not happen until nearly halfway through the book and the murderer and motive are actually explained at the time of the murder.  The only suspense is if the characters will figure it out, which I never doubted they would.  So it fails as a mystery.

Then the writing, while enjoyable, is very repetitive.  I read every piece of information at least twice although sometimes as many as five times.  And it's not as if the words are varied; it is nearly word for word repeated.  And it is not as if it happened in the beginning and then was explained at the end again; instead it happens and then is repeated something like two pages later.  I ended up having to skim .I hope this is not indicative of Wentworth's other works because I would like to give some of the earlier Miss Silver books a try.

Another problem for me is that it takes place in 1958 and a huge part of the plot is whether someone is illegitimate (and thus not an heir to a piece of property) and the goings on of stereotypical small English villages.  The first just seems so stupid to me in a time where it seems like so many people are having children out of wedlock and the latter is gossipy women with no ambitions in life other than to gossip about each other.

The detective Miss Silver seems a bit Marpleish, which is good as I adore Miss Marple but she doesn't appear until almost halfway through the book.  Jenny, the main character, is super lame.  And most of the other characters don't have much personality.  The most irksome part is the way everybody blames the victim of the murder: she deserved it because she had a strong personality and knew what she wanted (ugh, the attitudes about women that are sometimes expressed.)

Overall: Repetitive and without suspense. Not recommended.

Cover: My copy from the library did not have any cover but I like the purple and I find it funny that the author's name and the detective's are bigger than the title and thus more important/recognizable to the audience, presumably.
Posted by The Insouciant Sophisticate at 12:01 AM