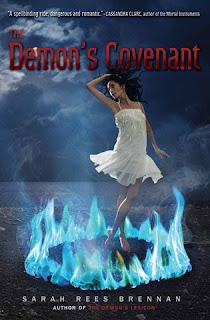 Spoilers for The Demon's Lexicon

Summary: Picking up a month after the first book ended, Mae thought things might be going back to normal.  But then she finds out that her brother Jamie has been sneaking out at night and interacting with another magician Gerald from the Circle that had originally tried to kill them.  So she calls Alan and Nick again as her only resource into the magical world.  Nick knows the truth about himself and something has happened between the brothers that causes a great deal of tension.

Thoughts: This is a switch as it begins in Mae's perspective and is in fact told from Mae's perspective; this makes me wonder if there will be subsequent books told from Jamie/Alan's POV.  I think I liked this book more, possibly because Lexicon is told from the point of view of a demon and that can be difficult for a human to understand.  It also ended up being a lot funnier with many quips. More of Alan/Nick's brother relationship is highlighted and I loved that.

I think my problem (and this is most definitely my problem and one that may not afflict you) is anxiety as I try to figure out the angle each person is going to play: Alan, Nick, Jamie, Mae, and the various magicians all have their own agendas and Mae is the only one we have some insight in to. The tension was awful.  I mean my stomach was tied in knots; it is not a feeling I like.  Will one of them betray another?  Will they all survive? Also sometimes the action was confusing and I had to reread several parts.

I also didn't like Mae's romantic entanglements as she has interactions with three different guys, none of which I can see turning out okay as all will cause her a great deal of trouble and/or heartbreak.

Overall: I liked it more than the first book but I just don't love it.

Cover: That seems more like Sin than Mae, which is weird as Sin doesn't play that big of a role.
Posted by The Insouciant Sophisticate at 12:01 AM