A Tale of Two Cities (Film) 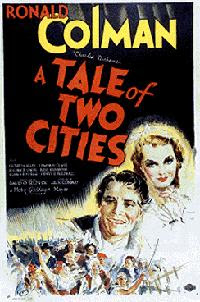 A Tale of Two Cities, 1935
Produced by David Selznick
Starring Ronald Colman as Sydney Carton, Edna May Oliver as Miss Pross, and Basil Rathbone as the Marquis de Everdeme (SP)
4/5 stars
Summary: An excellent adaptation of Charles Dickens's classic novel.
Thoughts: One problem I've had with versions of this story is the difficulty of finding Cartons and Darnays who look alike, which is an important plot point. This one did not succeed in that regard. But Ronald Colman is wonderful and was in fact my main reason for wanting to see this. Another reason was that it was produced by Selznick before he did Gone with the Wind and I wanted to see some of his other work.
Now this is one of the few Dickens novels I've read and of course a lot is cut or condensed but overall I think this is a very good production and worth seeing if you ever have the chance.
Posted by The Insouciant Sophisticate at 12:01 AM