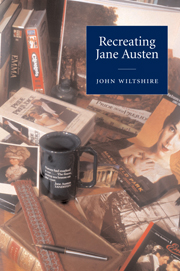 Summary: An academic look at how film adaptations of Austen's novels inspire us to look anew at the novels.

Thoughts: If I was more organized, I would have published this last week with the Bedside Companion Book but I'm not so here it is.  While I love Austen's novels, I'm also really interested in the films, hence my decision to pick up this book.

It was my fault for picking this up because it's a very scholarly look at Austen; this means many big words, many theories, and many examinations of other scholarly works.  I was expecting a more fun look at the movies that have been adapted from Austen's novels.  I shouldn't have because it looks like a skinny academic tract rather than a fun jaunt.  He looks at three movies inspired by Austen: Metropolitan, Jane Austen in Manhattan, and Clueless.  He looks at the relationship between Austen and Shakespeare. He looks briefly at some 90s adaptations of her films; as you can see it was published before that great spate of Austen films in 2005-7. I'm really not the best person to read this and I found it too boring.

Overall: For the Austen scholar rather than the more casual fan like me.
Posted by The Insouciant Sophisticate at 12:01 AM