A Slice of Murder 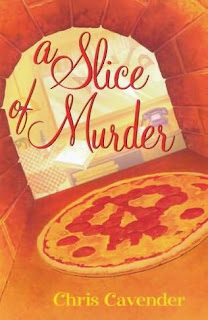 Summary: Ellie almost didn't take the delivery call but as a small business owner, she takes the plunge.  She comes to regret this as she finds the customer dead and is pegged as the prime suspect.  With the assistance of her sister, Ellie is going to clear her name and continue producing the best pizza around.

Thoughts: I started reading this and then immediately wanted pizza, which luckily I was able to have for dinner (plus black olives because I like it salty!)  My grandma actually recommended this series to me as we both like Joanne Fluke's series, which I would say are somewhat similar.

My favorite part was the sister relationship of Ellie and Maddy.  They truly love each other, support each other, and will protect each other.  They work as a team to run the pizzeria and to solve the crime.  Plus they're pretty wise-cracking to each other! I'm a sucker for strong sister/sister relationships in books so this played a big role in the favorable impression I have of the book.

Unfortunately I wasn't as charmed with the rest of the book, in particular Chief Kevin Hurley who seemed quite incompetent.  He didn't seem to explore many suspects beyond Ellie; he denied an attack on her life as a mere robbery; he ignores the evidence of his sister; and he's possibly tangled up in some dirty stuff himself.  The mystery itself wasn't that great either.  Some awkward attempts at romance for the widowed Ellie distracted from the storyline; personally I feel like she'll be more drawn to Kevin than any other guy.  I personally mostly just wanted to hang with Ellie and Maddy.

While I appreciate the recipes in the back, I didn't feel the book did a good job of describing all the delicious smells that come out of a pizza shop.  It also spent a bit too long on the minutiae of running a business, dull stuff indeed.

Overall: Has intrigued me enough to plan to read the second.

Cover: I think it's really good-I like the skull pizza although it's not original and I love the title font.
Posted by The Insouciant Sophisticate at 12:01 AM