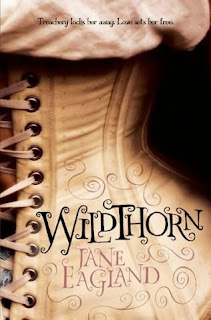 Source: Received from netgalley in exchange for an honest review.

Summary: Louisa Cosgrove is being sent off by her family to be a companion to another young lady.  But instead she ends up a Wildthorn, an asylum for the mentally insane, where she is called Lucy Childs. She knows she's not insane and that she must get out but she doesn't know how or why she was placed her.

Thoughts: I felt a little unsituated in time and place.  I knew it was England with Queen Victoria on the throne but that covers a huge time period.  I also think it was somewhat close to London as she manages to travel there a few times but I would have preferred it to have been described more.

Lou's dream is to be a doctor, like her father.  Of course, she has a lot going against her as a properly brought up young lady; very few people consider it appropriate.  And the all of the time she spends reading and studying is used as an example of her madness (that would be bad for us bloggers!)  And she has very little control as her brother is ultimately the head of the household as well as other interfering family members.

While not enjoying myself in the asylum, I thought it was very interesting and I preferred it to the end, where it gets kind of boring although Lou also gets some answers.  Inside the asylum, we get a glimpse at power hierarchies and just overall the awful conditions and lack of care.  I thought the writing was better there, which is another reason I preferred it to the end.

SPOILER: My preferred end would have left Louisa in the asylum where she really does go mad despite the attempts of her family to rescue her.  I guess I was in a bit of a dark mood while reading it.  This is a spoiler because that's not what happens.

You may have heard that there's a lesbian love story in here; I had.  What I didn't hear was that Lou was in love with her cousin!  That would be a FIRST cousin which is illegal nowadays although I know it wasn't back then.

Similarities: Definitely similar to Fingersmith by Sarah Waters which was a DNF for me (so long).   It also reminded me of The Snake Pit starring Olivia de Havilland as both feature the cruelties of asylums.  And of course I thought of One Flew Over the Cuckoo's Nest, especially as there is a nurse who is a bit like Nurse Ratched although not quite as bad.

Overall: Interesting themes of women's rights and place but marred by simplistic writing.

Cover: While appropriate, it really freaks me to see her shift (?) busting out over the corset.
Posted by The Insouciant Sophisticate at 12:01 AM