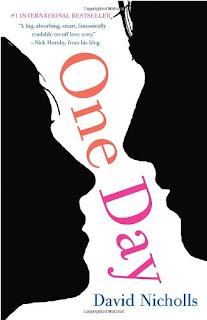 Summary: Tracing the relationship of Emma and Dexter over a period of twenty years, checking in on them on July 15 of every year.  Following their various relationships, falling-outs, making-ups, and everything in-between.  A huge hit in England, where it came out last year before crossing the pond to us this year.

Thoughts: I had basically only heard raves of this book; then I saw some negative feedback but by then I had already gotten the book so I decided that I would take it with me on a trip where I had ample reading time.  I ended up finishing it while I was waiting at the airport to go home which meant I had nothing to read on the plane :-(

I was conflicted about this as it has some of the things I don't like in books: casual sexual relationships, smoking (seriously Europe why do you smoke so much? OK that's really only based on this book and Larsson's books but still), and a lot of drinking.  I also went through periods where I really didn't like the characters.  First I didn't like Dex who's a womanizing alcoholic for much of the book.  I understood how Emma could like him because he had this charm and I totally get it but I don't like it.  In many ways, they're absolutely awful people, which is understandable as we're just getting snapshots of their life and people have bad days.

I liked the "hook"-it worked pretty well and while sometimes there were huge changes in between years, it was not difficult to follow those changes.  Nicholls is a very good writer and created a pretty believable story for these two characters.

I hated the end.  Don't want to spoil it but if you know what I generally like in books, you will understand when you read it for yourself.  Also note that it is being turned in to a film starring Anne Hathaway (love her! although why not an English actress-I love Emily Blunt personally) and Jim Sturgess.  My advice is to read the book first so you can tell everyone about it once the film arrives.

Overall: An intriguing love story with a lot of things I don't like in books.

Cover: I really love that it's kind of like that optical illusion so I think it's quite cool; my friend liked that the title is raised.
Posted by The Insouciant Sophisticate at 12:01 AM