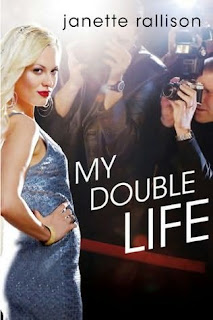 Summary: Alexia lives with her mother and abuela in a small town.  When pictures of her appear on the internet, she is contacted by a celebirty with an unimaginable offer that will change her life and help her meet her father.

Thoughts: I've read most of Rallison's works so when I saw this, I knew I'd want to read it.  I expected something funny with maybe a bit of a crazy plot plus judging from the cover, some Hollywood shenanigans, which I love.

I was pretty satisfied; Rallison is a funny author. Alexia was adorably awkward as she tried to flirt at home and then as she adjusts to her new life as rock star Kari's double.  Kari was also very sympathetic.  She has a lot of problems (gambling and shopping addictions) and is not articulate in the press but she is mostly sweet and seems determined to continue to produce quality music for her fans.  The whole plot is crazy!  But I sped through this book and accepted it.

The worst aspect was Alexia's relationship with Grant which was basically only described in terms of his looks.  Practically every time they were together she rhapsodized about how good looking he was without elaborating on any other qualities he might possess. Oh and for his singing voice because he's a rock star.

The other aspect I didn't like is that Alexia's father is supposed to be such an upstanding guy but he basically had a one-night stand with her mother because she looked like his dead wife despite her being a not-quite high school graduate.  Ew!  He was also kind of a jerk to Alexia when he first met her.

Overall: Wildly implausible but contains some sweetness and funny bits.

Cover: I don't really the picture but I like the spacing and styling of the words.
Posted by The Insouciant Sophisticate at 12:01 AM