A Case for Love 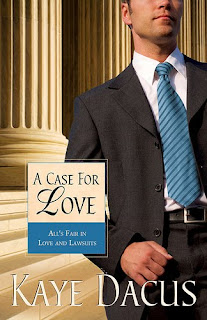 My reviews of Stand-In Groom and Menu For Romance.

Summary: Forbes Guidry has been the bachelor of the year three times in a row and he's sick of it.  Although he's dated before, those women called him a control freak.  So for now he's alone.  Alaine Delacroix is a host of a television show who wants to move up to anchor.  When they become entangled in a case that pits her family against his, sparks fly!

Thoughts: Now that's more like it!  This was a fantastic book with a strong hero and heroine.  Forbes, while definitely a control freak, really does care about his family and I would say he's the best hero of the trilogy.  Funnily enough, his favorite book is Bleak House because he is interested in the law case.  His one flaw seems to be a lack of appreciation for old movies because I can see how his controlling natures stems from being the oldest child and how it reflects his deep love for his family.

Alaine is a television show host who was introduced in the second book.  After seeing Meredith's (Forbes' sister and heroine of Menu for Romance) happiness, she even more longs for a romantic relationship.  But she is conflicted because the possible love interest Forbes is connected to the family that is bent on destroying a set of small businesses including the one that provides her family's livelihood.  She is also grappling with appearances and the inner self, which she is able to settle.

As their relationship deepened, they both come to important conclusions about their careers that I think will lead them to great happiness.  They had a lot in common and they seemed to make each other laugh.  They also have strong relationships with their families and develop a good rapport with the other's family.  As always, they have relationships with God and the prayers they pray were very consoling to me.

Two problems were I felt that a. their attractiveness was emphasized too much and b. the ending was wrapped up too quickly. Of course, I don't want to read about a law case that drags on for decades so it's probably for the best!  I liked all the descriptions of food in this book even though as a very picky eater, I can't imagine eating any of it (for example I hate seafood).

Overall: The best of the trilogy and a satisfying conclusion to the Brides of Bonneterre trilogy!

Cover: While I have mentioned that I don't like the cut off heads, I really like this guy's suit and the blue on the cover.
Posted by The Insouciant Sophisticate at 12:01 AM