Scott Pilgrim vs the World 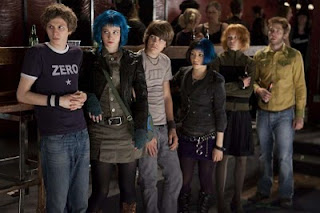 Scott Pilgrim vs the World, 2010
Based on the graphic novels by
Starring Michael Cera as Scott Pilgrim, Anna Kendrick as Stacey Pilgrim, Kieran Culkin as Wallace, and Jason Schwartzman as Gideon
4/5 stars

Summary: Scott Pilgrim plays bass in a band and dates a high-school girl.  Then he meets Ramona Flowers and immediately tries to woo her.  Along the way, he has to fight and defeat her seven evil exes.

Warning: I believe this movie skews younger: my parents who were quite interested in the concept and actors, did not enjoy it very much. My sister and I quite liked it.

After seeing The Other Guys recently, I was very excited about seeing some women even if they weren't the stars.  I LOVE Anna Kendrick and cannot wait for her to star in a movie (not to be mean and off-topic but why does Kristen Stewart get so much love? Is sullen and withdrawn really that hard to do? I think sparkling and peppy is harder but Anna does it!)  She plays Scott's sister and there's not nearly enough of her but I was happy every time she appeared.  Then Aubrey Plaza (from Parks and Recreations) plays Julie, a foul-mouthed woman who works many jobs and is able to give Scott lots of advice. Ellen Wong as Knives, Scott's high-school girlfriend, is great as the dumped girl who ends up growing a lot.  Mae Whitman plays one of the exes and I've really liked her ever since "State of Grace;" nice to see her reunited with Arrested Development costar Michael Cera.  Two other ex-girlfriends of Scott's, Alison Pill as drummer Kim and Brie Larson as newly famous Envy Adams are also quite funny.  I also liked Kieran Culkin as Scott's roommate/best friend who says SO many funny things and just generally seems to be having fun.

Unfortunately Michael Cera as Scott and Mary Elizabeth Winstead as Ramona were somewhat blah for me.  What do they see in each other?  They were so flat compared to those around them.  And I really wanted him to get a haircut (this is addressed in the film).

Looking over what I've written, I clearly preferred Scott's everyday life to his battles with the exes although they provided some good moments and some comic bits.  By the end they were just too long and I kept hoping for more of the real-life stuff.  I also would also call this a pretty nerdy movie-not in a judgemental way because I really liked it and I consider myself a nerd but because of the style and the characters.  I would definitely recommend Scott Pilgrim vs the World.
Posted by The Insouciant Sophisticate at 12:01 AM