My Name is Mary Sutter 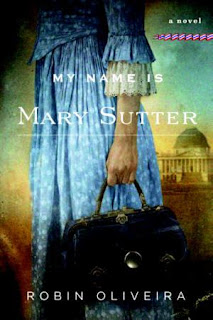 My Name Is Mary Sutter by Robin Oliveira
Viking, 2010
364 pages
Historical Fiction; Civil War; Literary Fiction
3.5/5 stars
Source: Library
Summary: Mary Sutter is a very talented midwife who would like to be a surgeon.  But that isn't going to happen in 1860.  Yet the outbreak of war (and a personal heartbreak) inspire Mary to leave for the front and pursue her dream.
Thoughts: First it was really nice to see a Civil War story that focuses on the Union side; I feel like I see a lot more of the Rebels.  Also nice to have a female protagonist, relatively rare in war stories.
Characters: There are several portrayals of real-life figures including Dorothea Dix, John Hay, and Abraham Lincoln.  I found the latter to be absolutely vivid and plausible.  I was less enthused about the fictional characters.

Mary is okay although she and her mother can be brutal with each other.  She also has a twin sister Jenny who does basically the worst thing a sister can do (and which oddly seems to happen a lot in sister fiction).  Then there is Christian, their brother who goes off to fight.  Thomas is Jenny's husband and he also goes off to fight; he is quite stupid, you'll see.  Then there are two surgeons who Mary appeals to for assistance in her dream and they grow to admire her strength very much.  Lastly there are Jake and Bonnie Miles who were odd characters; it's not that they acted odd but they didn't serve much purpose and I wouldn't have missed them.

Warning: Oliveira does not shy away from killing characters so be prepared.
Descriptions: There are some amazing descriptions here as Oliveira does not shy away from the chaos and blood of a hospital swarmed with casualties.  In fact they're not even really hospitals but barns, houses, open fields where the medical officers set up and struggle to save what they can without even a fraction of helpful supplies.  Amputations were very common and are described.  While many were disgusting to me, it's a truthful aspect of the story and I didn't find it gratuitous.  In fact I generally preferred the narrative to the dialogue which is basically the opposite of what I usually prefer.
Ending: Did not much like the end.  My favorite part (no it's not a spoiler) is the realization of some scientists that if the doctors/surgeons/nurses had washed their hands in between patients, more might have survived.
Overall: While the characters did not appeal to me, the story is still important as it reveals an under-reported aspect in Civil War fiction.
Cover: I think it reflects the determination of Mary as she stands straight and grips her bag.
Posted by The Insouciant Sophisticate at 12:01 AM