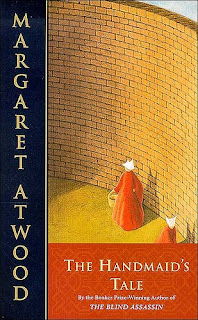 Summary: Offred is a Handmaid in a dystopian nation formed out of the US.  As a Handmaid, her sole preoccupation is to become pregnant by the Commander; any child produced will then go to the Commander and his wife.  In this society, people are sharply divided in to different ranks, with little interaction.  Offred can remember some of the time before when she had a husband and a child but those memories are fading.

Thoughts: I had tried to read this once before but failed due to my workload and I think it also had something to do with the writing.  It's written in stream of consciousness style which works with the story but is not at all my preference.  It is also less plot driven and more about Offred thinking about her past, what the future might hold, and how she feels without her doing anything.  Not that she could do anything in the very hierarchical and patriarchal society in which she lives.  I think I just found it too depressing and terrifying.

Overall: I can see why this is such an acclaimed story and it is well-written but it's not quite my taste.

Cover: I find the cover very striking.  Long before I read this, I noticed it and thought it looked really weird.

Has anyone seen the movie? It seems like a hard book to adapt.

Read as part of my FITG challenge.
Posted by The Insouciant Sophisticate at 12:01 AM