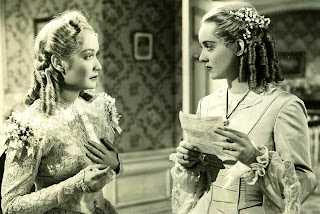 The Old Maid, 1939
Starring Bette Davis as the titular old maid Charlotte, Miriam Davis as her cousin Delia, and George Brent as the man they both love Clem.
2.5/5, which is mostly for the awesomeness that is Bette Davis
Spoilers
Summary: Based on Edith Wharton's short story (which I've read) and a Pulitzer Prize winning play by Zoë Akins. Charlotte secretly has a child who she cannot raise due to the strict moral codes of the 1860s so Delia takes them both in and adopts the child. Over the years, the child calls Delia "Mummy," basically driving a stake in to Charlotte's heart.
Thoughts: Miriam Hopkins's character is a *word that I do not want on my blog* and I very much wanted to slap her, which my friends on facebook got to read multiple times while I watched the film. She loved Clem but couldn't handle marrying a poor man. So Charlotte got to be with him. Then Charlotte was going to marry a man who would accept her loving of the ward Tina (short for Clementina), who was actually her daughter but no one knew. Once Delia knew it was Clem's, she ruins the chances for marriage. After Delia is widowed, she gets Charlotte and Tina to move in with her and gets Tina to call her mother. When Tina is an adult, Delia officially adopts her and thus gets Clem's child all to herself. After Charlotte confronts her, Delia realizes somewhat that she was a *word that I do not want on my blog* and has Tina give Charlotte her last kiss before leaving with her new husband.
I don't know if that explanation makes sense but this plot made me so angry. It was a little different in the short story (Delia doesn't ruin Charlotte's chance at marriage) but it provoked similar feelings. It is not helped by the fact that I LOVE Bette Davis and wanted her to claw out Miriam Hopkins's eyes but was sadly disappointed.
Overall: NOT RECOMMENDED!
Posted by The Insouciant Sophisticate at 12:01 AM