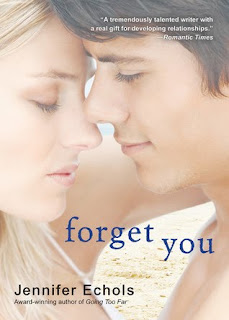 Summary: Zoey thought she was going to meet Brendan.  But then she wakes up from a crash with Doug.  And now Doug is acting like he's her boyfriend and Zoey can't remember anything about that night.

Some spoilers-don't think it will ruin the book but...

Thoughts: This was a real mixed bag for me.  The things I liked, I really liked but the things I didn't like, I hated.

Liked: Echols writes steamy scenes very well so even when I didn't really like the characters (see below), I enjoyed those passages.  They were probably the most engaging part and I could see them as a couple then.

While Zoey's dad is a huge jerk (he cheated on her mom and knocked up his 24 year old coworker; they elope to HI after Zoey's accident), he was interesting.  He's very selfish, is a poor excuse for a father and I would hate to meet a real-life him but in the context of a book, I liked it.

Didn't Like: Let's start small: the timeline seemed a bit confused to me.  It seemed like more time should have passed than apparently did.

Then this is more of a quibble but Doug has been to juvie.  In many books, he would be the alluring bad boy who fascinates most of the girls but in this one he's a dangerous outcast. That just seems weird to me although I very rarely cheer for the bad boy when I'm reading (and he's not so bad anyway).

And biggest: Zoey is an idiot. She spent all summer listening to Brandon tell about the different girls he slept with (it seems like at least a new one every week) but then he sleeps with her, so she thinks they're a couple.  And it's not like they talked about it, she just assumed because they had been friends so long.  Plus he was obviously avoiding her and hanging out with Stephanie (why does Stephanie have to be a ho?  We're really not like that).  Zoey is justifiably protective of her mom (who was hospitalized after a suicide attempt) but how did she think such a thing was going to be contained?  And finally it takes Zoey way too long to admit that she has no memory of that night and start really digging for answers.

Overall: Some well-written passages but the story as a whole lacks.

Cover: It's okay from a distance but up close, Doug's stubble is heading in to perv territory.
Posted by The Insouciant Sophisticate at 12:01 AM