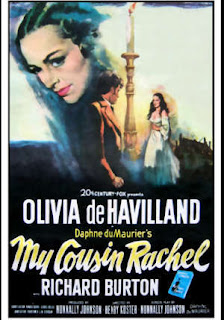 My Cousin Rachel, 1952
Starring Olivia de Havilland and Richard Burton
based on a novel by Daphne du Maurier (author of Rebecca)

Summary: Philip Ashley (Burton) receives two letters from his cousin/guardian Ambrose that describe a man being tormented by his new wife Rachel (de Havilland).  When Rachel comes to visit though, Philip falls in love and eventually wills his estate to her.  Shortly thereafter she becomes distant and he falls ill with similar symptoms to Ambrose.  Is Rachel trying to kill him?

Thoughts: I didn't realize that Richard Burton was in this, at first.  It appears that it was his first big American role (although he was nominated for best SUPPORTING actor despite most definitely being the star).  It was after Ms de Havilland had already won two Oscars and she's the title character so it makes sense that the promotion centers around her.  I found it on hulu (expires October 1 which is why I finally watched it) and while I hate their commercial breaks, they weren't too intrusive here.

It's very suspenseful as the audience never knows if Rachel has good honest intentions or if she's masquerading for her personal gain.  Additionally there's romance as Philip is head over heels in love with Rachel (much to the disappointment of his childhood sweetheart Louise).  The ending is not resolved her; no clearcut answers here.

I also really want to read the book now.  I liked Rebecca and I've been wanting to read more of du Maurier's work.  This seems like a good starting point although I don't know when I'll have a chance.
Posted by The Insouciant Sophisticate at 4:21 PM