Harry Potter Should Have Died 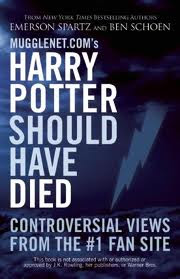 Summary: Short essays arguing various points of HP fandom: such as best book, should Harry have died, viewpoints on Snape as well as more frivolous topics such as would you rather make-out with Voldemort or a dementor?

Thoughts: I like the title because I kind of did want Harry to die AND it would have spared us that awful epilogue (sorry I hate H/G and H/R)

They describe Polyjuice Potion as easy to make because Hermione was able to make it in her second year.  Um, that's because she's brilliant and even then it takes months of being particularly vigilant in order to successfully create the potion.

I had a big problem with one of their verdicts-GOF as the best HP book.  That only works if you define "best" as a book that tries to bridge between the first three and the last three but is instead disorienting, confusing, and unenjoyable.  I hate GOF-it does not function as a great middle book (although generally the middle book of trilogies sucks and that is applicable here).  Plus only PoA, GOF, and DH are debated.  What about the fantastic introduction to the magic world in SS/PS?  How about the intriguing mystery in CoS?  The general epicness of OotP?  And I personally love all of the Tom Riddle backstory in HBP.  And they end up declaring OotP as the worst book! Inconceivable!

Not well written-I think it would have worked in online format but as a book, I expect more.

Overall: Poorly written with some shaky conclusions drawn. Not recommended.

Cover: It's okay-not outstanding.
Posted by The Insouciant Sophisticate at 12:01 AM