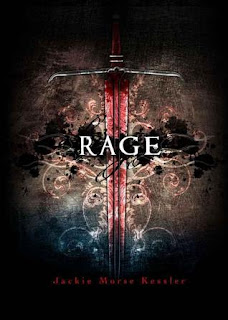 After enjoying Hunger, especially the basic concept of the Horsemen of the Apocalypse, I knew I'd want to read the second book which looks at the Rider of War and Missy Miller, outcast and self-injurer. I ended up liking this book even more because I thought that I got to know Missy better. Also because Missy has a cat and a sister, like me.

Missy's beloved cat recently died, her sister seems to hate her, her parents are too busy to notice her, her ex-boyfriend brutally humiliated her, and her escape is either the pain of soccer or the sharpness of a blade against her skin.  But she has been chosen by Death and she has the opportunity to unleash all of her wrath and pain on the world through her new role.  She can leave behind her awful life for something unique.

Structured somewhat like the previous book, Missy also interacts with Death, Famine, and Pestilence (an intriguing character who will be the focus of the next book and who we've seen the least of so far) and forms a bond with her awesome sounding steed.  Missy has her heart broken by the reality of war and its effects on civilians which helps lead to her transformation.  She also has an unusual romance (that's all I'll say about that).

Similar to Hunger, the book concludes with Missy in treatment for her self-cutting and with an optimistic outlook for a healthy future but without promising some unrealistic happily ever after.  That's one of the things I like best about these books.  Kessler looks at some of the deepest, darkest pains experienced by young people and offers hope without sugarcoating it.  Also like Hunger, Kessler will be donating a portion of the profits to a non-profit; in this case, it's To Write Love On Her Arms or TWLOHA.