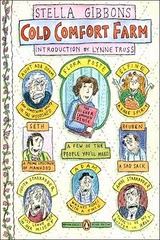 Meg Cabot had recommended this book, which is how I first heard about it.  Additionally I really like this cover that I found, although my copy from the library was just a plain blue.  I wasn't sure what to expect other than hopefully a good time.

I really struggled at first to get into the story.  Flora was recently orphaned and she is looking around over her family relations to decide where she will live.  She ends up picking the family at Cold Comfort Farm, where she is sure to encounter problems that she can solve.  And she does.  She finds a bewildering assortment of relatives, surly and intent on their lives as they've always been.  However Flora wades in and sets their lives on a more modern path, arranging marriages for several and new career paths for others.

Apparently this book is somewhat parodying some rural life novels of the time such as DH Lawrence, Thomas Hardy, and the Brontë sisters.  I've only read the latter and references to them are explicit in the form of a character who argues that Branwell wrote his sisters' novels because certainly Wuthering Heights could not have been written by a woman!  I don't understand his rationale at all but I was fascinated.  Some of the characters also spoke in a "country dialect" akin to Joseph in Wuthering Heights albeit more comprehensible.  The other elements were probably lost on me as I am unfamiliar with those types of novels.

Another interesting element is that this book is technically set in the future (the late 40s) with video phones and a different historical path (I believe an Anglo-Nicaragua War is mentioned).  That was not a very important aspect though as most of the story is set on a very rural farm.

However I really liked the characters, especially Flora, the modern young lady who inserts herself into the lives of her relations and I would say makes them better.  She was a funny character and very likable.  The other characters were also enjoyable.

FITG Challenge; British Books Challenge
Posted by The Insouciant Sophisticate at 12:01 AM