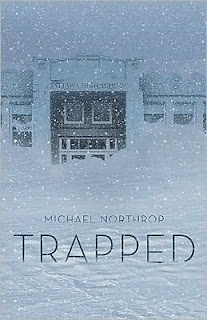 This is another book I probably wouldn't have read if not for the Contemps spurring me onward.  The basic premise is that Scotty Weems and seven classmates are stuck at school after the storm of the century strikes, trapping them there for a week with limited electricity and food, and the knowledge that no one knows they are there.

This was quite a frightening book in that the monster snow storm that appears last about a week, covering even two-story buildings and pulling down the phone and power lines.  Now they are in a school, so there are bathrooms, food in the cafeteria, and rooms aplenty.  Unfortunately as the week progresses that becomes less important as the water, the lights, and the heat fail.

The beginning of the book suggested the death of some of the seven stuck at the school.  Not Scotty who narrates the entire book, but perhaps one of his friends Jason or Pete, one of the girls Krista or Julie, or one of the other guys Les or Elijah. I was disappointed with the conclusion of this plot line as I thought it would get a lot darker than it actually did.  Additionally as high school students they navigate the roles of cliques and interactions with each other in order to survive.  Their efforts to survive were sometimes ingenious but frequently repetitive without providing additional depth to my understanding of their character, which is my main complaint against the book. Perhaps it would work better for readers who are 14/15, the ages of the characters in the book.

I'm been debating if this would be more fun to read when it's really cold and snowy outside or when you know you are safe because of the very nice weather.  I think I'm the kind of person who prefers the latter so I'm glad I live in a warmer area that doesn't get snow.

Read for the Contemps Challenge.
Posted by The Insouciant Sophisticate at 12:01 AM