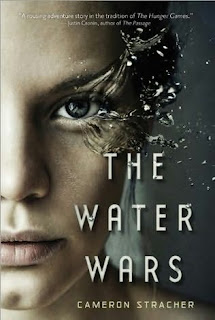 I wanted to read this because of the terrifying world it presents; in a not-too-distant future, most of the fresh water in the world has dried up and the rest of it is under the control of a greedy corporation.  I say not too distant because the main characters' parents remember a world that sounds much like ours but in only a few decades, the landscape has radically changed.  Wars are perpetually occurring as the battle for water rages.  I thought the background for this story was fascinating.

However that was not the main focus.  Instead it is Vera and Will, siblings, who meet a boy named Kai.  Kai, it seems, can find water making him a valuable asset to whoever can maintain control of him and putting his freedom at risk.  When he and his father are taken one day, Vera and Will set off after him leading to an action-packed, thrilling adventure.  Or what should have been-I had to force myself through the book because I wanted to count it for the DAC and because it's pretty short.  There were some interesting characters who befriend Vera (pirate Ulysses and rebel Sula) and their struggles to rescue Kai should have been interesting.  But because I didn't feel connected to Vera or Will, I cared less.

Read for YA Debut Author Challenge
Posted by The Insouciant Sophisticate at 12:01 AM