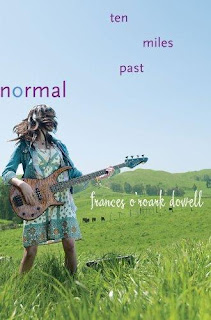 Source: Received a free egalley through GalleyGrab in exchange for an honest review.

I wasn't sure what to expect with this book beyond the fact that it looked to be about a 14-year-old attempting to come to grips with herself.  And that is what happens, partly.  When Janie was 9, she thought it would be awesome to live on a farm...and her parents agreed.  But what was cool at 9 is less cool at 14 when you become known as the girl who came to school with goat poop on her shoe.  Plus she's far away from her best friend Sarah and oh so lonely at school.

That is until something changes.  Janie and Sarah are partners in History of American Women class who decide to do a project on a local civil rights activist and the school she helped found.  Additionally they become interested in Jam Band, featuring the attractive Jeremy Fitch and the mysterious Monster.  Plus Sarah's big sister Emma, who always seemed too cool for them becomes interested in their lives. What's happened and what is normal anyway?

I sped through this book because I could not get enough of it.  Janie is an immensely likable character dealing with a lot of problems that plague you when you are a teenager.  She doesn't fit in at school, she lashes out at her family, and is generally unsatisfied.  But through the course of this book, she changes.  She makes a few new friends; she learns how to play bass (so cool!); she has several crushes (don't worry, it's not a love story); she mends her relationship with her mother; and she has a greater appreciation for history and bravery.

While this might be aimed more at a middle-grade audience, I think it can be appreciated by us older folks looking for a sweet story with flawed but likable characters.

Overall: Delightful-I flew through this book falling more in love with every character along the way!
Posted by The Insouciant Sophisticate at 12:01 AM