The Betrayal of Maggie Blair 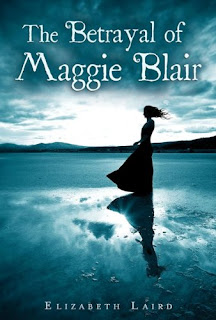 Source: Free e-ARC via Netgalley in exchange for an honest review.

I wasn't sure what to expect with this book; I knew there was something about witches and Scotland in the past but what did the title mean by "betrayal?"  And then I saw it was quite long (for a YA book) and I was worried about if the story could be sustained-I generally encourage shorter works, whether it be book, movie, or song. I ended up pleasantly surprised as the pace was very good overall.

The story covers a huge journey made by Maggie, both physically, through Scotland, and mentally, as she examines her faith and her conscience.  The story opens with the young orphan living with her grandmother Elspeth in a tiny shack on a Scottish island.  A neighbor leads accusations against the two women that leads to their conviction as witches.  Maggie is fortunate enough to be able to escape and she goes to her uncle's house.

At her Uncle Blair's house, she is welcomed, not entirely warmly, and begins to integrate herself into their life.  They are Covenanters-Presbyterians who reject King Charles II's intrusion into their religious life and subject to dreadful oppression.  Indeed their beliefs lead to Uncle Blair's arrest where he is moved across the country. As their suffering increases, Maggie makes the decision that she will go save him.

This results in her journey to Edinburgh (I'm not entirely sure about distances as they're represented in how long it takes to walk-but about two days) with a friend Tam from her early days.  His wiliness gets them there safely but Maggie must figure out her own way to save Uncle Blair and to create her own future.

I was absolutely fascinated with the historical background; of course I'm well aware of historical persecution by the various sects of Christianity but the British Anglicans against the Scottish Presbyterians was not well-known to me.  I know the campaign against the Irish Catholics much better.  The work necessary just to survive, just to scrape by was also well represented.  I could feel Maggie's exhaustion over all of the work that had to be completed.

The world Laird drew was dirty and superstitious and confused.  The characters were complex with their good and bad side well-represented.  Maggie is somewhat naive at the beginning but that changes as she makes her way in the world; she is quite fortunate to move without molestation and generally finding a place to stay safely. The story is told from her perspective and I found her a good narrator.  Her questions about faith were fascinating to me.  She doesn't know much about religion but she seeks to come to some understanding of it as well as of her own nature, which leads to her concluding decision.

The other characters were also interesting.  Her grandmother's anger leads to her persecution but she looks out for Maggie until the end.  Tam, a thief and poacher, continually helps Maggie although he also brings the villainous Annie to her door.  Annie is mostly a liar and a thief but she also has a bit of the innocent to her in the beginning. The Blairs seem like good people, although they have their faults too.

I admit that I had expected some romance just because YA tends to have that but it doesn't really.  Maggie expresses some interest in a few guys but nothing comes of it and she retains her independence.  Like in StarCrossed, I appreciated this lack of romance because there was so much going on with the religious/political aspects that it would have been unnecessary.

From what I can tell, this was previously published as The Witching Hour, a title which I don't think fully covers what occurs in this book, but I'm not sure how I feel about this title.  I like the inclusion of Maggie's name but I feel like the ending is not a betrayal so it doesn't fully encapsulate this book either.  The author's note also reveals Laird's family connection to the events described as she had family persecuted in such a manner; that was interesting to learn.

Cover: I think the blues are very striking although some plaid would not have gone amiss!

British Book Challenge and E-book challenge.
Posted by The Insouciant Sophisticate at 12:01 AM