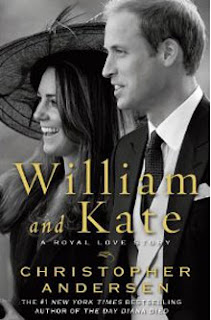 I know, I know-another book about the young royal couple? What can I say-I'm excited!  And the wedding is getting so close now!  This is the best of them so far, in my opinion.

I thought it balanced the perceived audience desire to read more about Diana with about equal amounts of William and Kate's life; Kate, as always, gets talked about less.  She is shown as a woman patiently waiting for her Prince; her life is a backseat and attachment to his and thus his life is the focus.  But the love between them also is highly emphasized as can be seen by the subtitle.  Kate is praised for the way she has conducted herself throughout the entire affair, although the snipes at her "commonness" continue to bug me.

Oddly the parts that irked me the most involved Harry.  Andersen had a tendency to call Harry "The Spare" and recounted the idea that he is actually James Hewitt's son. And of course, their constant drinking and partying is mentioned.

Additionally there are two sections of pictures, most of which are familiar but a few were new to me.  Diehard royal fans will probably know all of them.
Posted by The Insouciant Sophisticate at 12:01 AM