Anna and the French Kiss 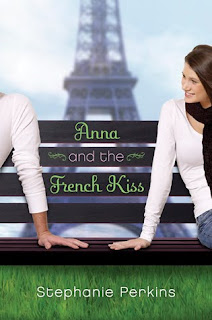 I was really excited about this book after seeing near unanimous acclaim for it around the blogosphere.  And I loved the writing and Anna's voice (for the most part).

Anna's father (a Nicholas Sparks kind of writer) decides that she should be more exposed to culture so he sends her to a boarding school in Paris instead of allowing her to finish her senior year in Atlanta.  Obviously Anna is upset but she quickly becomes part of a group of friends with Meredith, Rashmi, Josh, and, most importantly to her, Etienne St. Clair.  Unfortunately for her romantic hopes, St. Clair already has a girlfriend, the already graduated Ellie.  Meredith also has a crush on St. Clair, which she confesses to Anna early on (that's important).

As I said, I really loved the writing.  Perkins immersed me in Paris and did a fantastic job covering the passage of time as almost a whole school year passes over the course of the book.  Anna loves the cinema and her interest in films mimics my own so that made me happy.  The characters were well-differentiated with their own personalities and interests.  They seemed like pretty typical teenagers.

But. (You knew there was a but coming, didn't you?) But the majority of the book is about Anna's crush on St. Clair, a guy who is in a relationship since before she knew him even if he FINALLY manages to break it off. I know St. Clair is supposed to be so great but I had many problems with him:

A. I do not get French names; is Etienne like John or Matthew here in the US because I cannot imagine how it's supposed to be pronounced and it just seems weird which meant that I thought of him as St. Clair which makes me think of St. John in Jane Eyre, not a good comparison. (I know, I know, hegemonic American but I can only speak from my own experiences)
B. He's short, which is mentioned many times.  His exact height isn't given, which might have been helpful for me because I kept picturing him as my height, which no. Not attractive.
C. He seems to have had a crush on Anna the whole time without having the guts to break up with Ellie.  I know he's going through a hard time, way harder than anything I've had to deal with, but it's just not the way a gentleman should act.
D. He confesses his interest in Anna while drunk and still officially the boyfriend to Ellie; he sleeps (platonically) in the same bed as Anna for three nights; and then later makes out with Anna (and while she's also culpable, I think he is more so). Not cool, St. Clair!

I'm not asking for a perfect person; that would be boring. His good traits are good; he's friendly to most people, loves history, adores his mother, and is loyal to people he's not dating. But I was not down with his behavior to Anna, Meredith, or Ellie.

Especially because of the way Anna acts and reacts.  She spends so much time confused by Etienne thus leading to making some spectacularly stupid decisions such as dirty dancing with him while drunk and sort-of dating a loser fellow student.  She's whiny and while she starts the book basically afraid of Paris, she ends being too good for America.  She does the same thing to Meredith that her American friend did to her (although I would argue that Anna is slightly worse) and it takes her forever to realize that.  By the end, I didn't even really like her though I still enjoyed her narration and descriptions.

Warning: Drinking (technically not underage since they're in France); swearing (especially toward the end)

I know I spent more time listing what I didn't like than what I did like but I really did enjoy reading this book; I'm cautiously optimistic for Lola and the Boy Next Door even as I question Perkins' judgment in naming her main characters Lola and Cricket.
Posted by The Insouciant Sophisticate at 12:01 AM