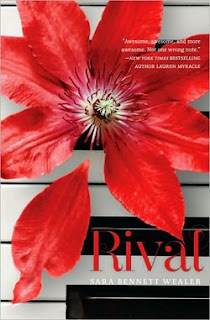 I wanted to read this for the Contemps Challenge but once I discovered the fact that it was in large part about music, I was even more excited.  The book is framed as a rivalry between soprano Kathryn and alto Brooke, who are outwardly as different as it comes.  One is retiring, petite, and blonde to the other's popular, tall, brunette self.  But they share a deep commitment to music, especially to the Blakemore, a music festival that offers $25,000 to the winner and could serve as a ticket out of Minnesota.

The story is told in alternating chapters and switching times.  Most of the time is spent during their senior year but it also flashes back to their junior year when their rivalry was cemented.  Each girl had a distinct personality and it was very easy to tell who was sharing her story. Additionally the timeline was not muddled, which could have occurred when juggling two characters and the passage of time.

I really liked both girls.  Kathryn resembles me more-taking honors classes, shy, with parents who love her and care about her.  But Brooke has her own magnetism as the most popular girl in school with popular older brothers and wealth.  I so wanted the girls to be friends.  And the thing is: they kind of were.

But misunderstandings plagued them.  Brooke didn't want to be popular; she wanted to be a "music freak" (and why are choir kids so maligned? I mean, I was in orchestra which is even geekier so it's not like I understand the social hierarchy but what's so wrong with singing? Is it because they care and aren't apathetically aloof?)  Kathryn was intrigued by the popular crowd though and neither girl was able to share their deepest feelings to create that strong friendship.  As the book progresses though, I just wanted them to sit down (alone with no one around) and hash everything out.  Luckily the ending hints toward a more positive future but without spelling anything out.

Overall: A fun book with two great main characters.  Especially recommended for anyone who studies classical music but it's not required.

Cover: I don't know about the cover.  I like the piano and the brightness of the flower but I'm not sure I like the flower itself.

Read for Contemps Challenge and YA Debut Author Challenge.
Posted by The Insouciant Sophisticate at 12:01 AM