The Spy Who Came In From the Cold 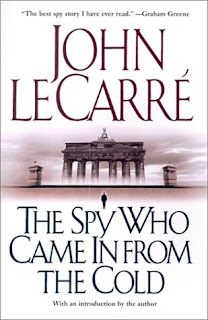 I'd always heard about John le Carre's spy novels but I had never read one so I picked up what is probably his most famous to give it a try.

This book is set in about 1962/63, sometime after the construction of the Berlin Wall when tensions between Great Britain and East Germany are high. Leamas is in charge of a West Berlin spy division but all of his agents are being killed by East Germans under the direction of Mundt.  He returns to England where a plot is hatched to make it appear as if he is disgraced so that he can seem to defect and implicate Mundt as a British agent.  A complication arises when he becomes involved with Liz Gold, a British Communist Party member, but the plot seems to be working.

I was so caught up in this story!  I kept trying to figure out what would happen next and what the ultimate outcome would be (I was not even close) as the layers of intrigue and betrayal unraveled.  The ending was completely unexpected to me and while not what I wanted, entirely fitting with the story.  I'm used to the more glamorous pictures of spying such as in James Bond but this is altogether different.  It's dirty, often crude, and certainly unglamorous.  As presented, there are no clear-cut "good" and "bad" guys in the Cold War battle as both the British and the East Germans use the same methods and motivations without the guidance of morals.

Leamas is painted as largely fed up with the spy game as bloody and cruel; he claims no specific ideology, whether to Communism or capitalism or something else.  It's just what he has to do and what has to be done.  Liz is a sweet girl, loyal to Leamas, but baffled by spying and the dark side that the public doesn't usually hear about.  Mundt is a great villain; he became a Communist because they were the ones in power but as a former Nazi, his main belief seems to be antisemitism.  He is cold and ruthless.

Overall: An intriguing look at Cold War tensions and spying.

Read for British Book Challenge
Posted by The Insouciant Sophisticate at 12:01 AM