Guardian of the Gate 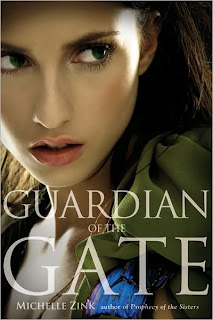 Guardian of the Gate by Michelle Zink
Little, Brown and Company, 2010
340 pages
YA; Historical; Fantasy
3.5/5 stars

Summary: Now that Lia knows about the battle between herself and her twin sister Alice, she is doing everything she can to prepare herself for the final battle.  She searches for more information and to develop her powers.  Betrayal, magic, and power lust fill the pages as the sad truth is revealed: only one sister will be left standing.

The Prophecy of the Sisters was one of the first books I reviewed, way back in December 2009 and I was very eager for this, the second book, but I am only just now getting to it.  In short, I was disappointed.  My biggest disappointment is a SPOILER but I have other reasons. However there were still some things I liked so I'll start with those.

For the most part, the book reminded me of LOTR: FOTR because Lia goes on a journey to Altus with a few companions, receives healing and shelter there with elegant creatures, and then resumes her journey.  When I was picturing most everything about this, I used visuals from the film.  Now while I mention those similarities, I don't think it was copying or referencing LOTR; that's just what my mind imagined.

I still mostly like Lia, whose troubles just keep increasing as we prepare for the final confrontation.  Edmund plays an increased role while Sonia and Luisa are still here.  A few new characters are also introduced (see spoiler for the most important one).

And now we come to the negative.  Because Lia and Alice are separate, there is not much of Alice which is unfortunate because the few scenes where they're together were great.  Alice as a character still does not have much of a personality beyond her desire for power and to destroy Lia but I still was intrigued by her.

In general, it also took too long for things to happen.  I kept waiting and waiting for something to occur to push forward toward the finale but it didn't.  There is some progress made in the later pages but it took too long to get there. I enjoyed the writing and the descriptions but I didn't need as much as I was given; I would have preferred more action.

My biggest source of discontent was the new relationship Lia formed with Dimitri.  I really liked James in the first book despite his limited presence and Lia for the most part just brushes aside thoughts of him for the "dreamy" Dimitri. Well, you know what? I don't like Dimitri and every instance where she thought about him, kissed him, touched him, made me like her a bit less. I also remain a bit suspicious of him although there are no outright reasons to be so.

Overall: It is a must to read these books in order but this seems like a filler book in between the world-building of the first book and the ultimate showdown in the third. It would be necessary to read this but I didn't really enjoy it.

Cover: I also don't really like the redesigned covers; I found the original first cover appropriately creepy and the new covers with the faces are less to my taste. The cover model is very pretty though.
Posted by The Insouciant Sophisticate at 12:01 AM