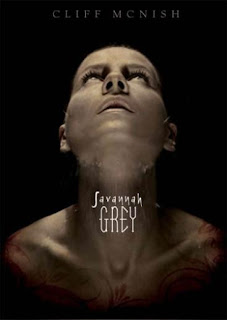 I wasn't sure what to expect from this novel, which I requested because the cover looked different and it was YA. And this was certainly different from anything else I've read.

I was actually most intrigued by the Orcassa, an incredibly adaptative creature who has flown through the universe and through the billions of years of earth in order to become the "perfect" creature.  Its chapters were black with white ink and covered the Orcassa's attempts to always triumph.  But nature has created its own weapons, culminating in Savannah Grey, an otherwise ordinary girl.

Savannah is the main character, obviously, and she realizes that she is prepared for something due to the mysterious creature (I'm still not sure what it is) in her throat.  Any attempts to come close result in Savannah's unconscious attack on that person.  Reece seems to understand her because he also has throat issues.  Together they seek to uncover the mystery with several twists and turns in their quest.

I did think the book was a bit long but the final climax brings Savannah and two friends against the Orcassa and his two main creations in a fight where Savannah must control utilize her unique powers in order to achieve victory and save the world.

Overall: While not entirely to my taste, this was a unique and mostly well-written horror story.

Cover: The throat is exactly what should be highlighted.

Read for British Books Challenge and Ebook Challenge
Posted by The Insouciant Sophisticate at 12:01 AM