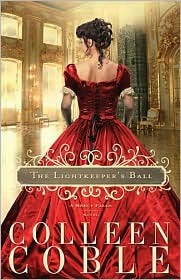 Source: A free e-copy via Netgalley in exchange for an honest review.

This is the third book in Mercy Falls Series and it features both of the couples from the first two who are expanding their families.  But the focus is Olivia Stewart who is coming to Mercy Falls from New York City in order to discover the answer to many questions.  Did her sister Eleanor, who's terrified of water, really drown herself? Could Eleanor's fiance Harrison Bennett have something to do with it? And
could Olivia bring herself to marry Harrison in order to help the Stewarts recoup their money?

First things first: Harrison Bennett is a fantastic hero! He is an honorable man of God, skilled at numbers and management as well as the mechanics that would enable an aeroplane to fly, thoughtful gift-giver (diamonds!), and eager to love and cherish a prospective wife.  I loved reading about him!

Unfortunately his mate and main character of this book Olivia Stewart is much less to my liking.  She spends most of the book masquerading as Lady Devonworth, her title true, but she ought to have told Harrison the truth much sooner especially because they're engaged for much of the book!  Originally it is a sham but once it is revealed to be made of love, she should have bit the bullet and told him.  Instead he suffers from the inevitable feelings of betrayal that might have been lessened had she told him earlier instead of hearing it from someone else.  After the troubles with Eleanor, Harrison had some (completely understandable) trouble with the Stewart family, so Olivia feared his reaction.

She also struggled with a woman's place in society; she had been trained from birth to be the "perfect" wife who plans parties and socializes.  But Harrison helps her to see that Jesus values her for who she is and that she can be much more than just a wife.  With his love and support, she can do anything.  Additionally Olivia is a remarkably clumsy heroine as she manages to sprain her ankle and a wrist in addition to other bruises; it got to a point where I just wanted her to sit so she could protect herself.

The mystery was less engaging to me than the romance although Harrison's efforts to help warmed my heart.  Basically Olivia thinks her father is dead but then finds a letter suggesting he may not be.  Plus it turns out he left most of his fortune to her illegitimate half-brother about whom she had known nothing.  And it seems that someone is trying to kill her.  The machinations by the villain(s) overwhelmed me.  I was much more interested in the romance, the friendships Olivia develops with Addie and Katie, and Olivia's growing understanding of God.

Overall: A good historical romance; definitely recommended for those who have enjoyed the previous Mercy Falls books and for those looking for a GREAT hero!

Cover: GORGEOUS-I love covers with a big, bold dress capturing the eye.
Posted by The Insouciant Sophisticate at 12:01 AM