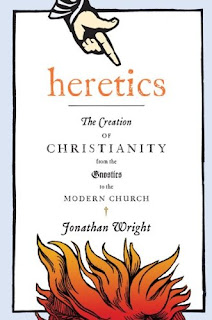 Source: Received a free e-ARC via Netgalley in exchange for an honest review.

I chose to read this in order to learn more about heresy within the Christian faith.  Almost from the beginning, "heresy" blossomed.  I put that in quotes because there was disagreement about almost everything within Christianity.  Was Jesus God or man or somewhere in between?  How did one worship God? These and other questions pushed toward the solidification of an orthodox interpretation in a reciprocal relationship.

Then the entire setup changed as a relationship between church and state, beginning with Emperor Constantine, emerged.  This increased the stakes for enshrining an orthodoxy as well as the stakes for heretics, who were increasingly exposed to tortures.  Then came the Reformation and America's creation until we reach the modern period with our notions of religious pluralism and the consequence that the word heretic has somewhat lost its punch.  People are called heretics in circumstances that are unlikely to have them lose their lives.

Overall, very interesting and scholarly and worth savoring slowly over a period of time.

Cover: I like the fire but it's not very eye-catching.
Posted by The Insouciant Sophisticate at 12:01 AM