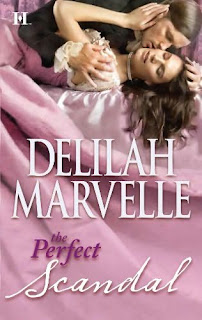 My review of the second book in this trilogy: Once Upon a Scandal.

This book opens with Marvelle sharing about her Polish ancestry and how that inspired her to write a book with a Polish heroine-fascinating and totally unfamiliar to me.

The book proper drew me right in with Tristan worrying about his future and Zosia confessing her foreigner status as well as her Roman Catholic identity before suggesting that they marry.  I was struck by her boldness (as was Tristan).  The lightness of this early chapter is soon offset by some darkness as both Tristan and Zosia have hidden depths.

Tristan is a former self-mutilator with the scars to prove it and has a bit of an S&M fetish.  Although he longs for marriage, he feels that no woman could ever accept him, a "queer." That's the word used and obviously that pulled me up short because it has a very different meaning nowadays.  Furthermore his sole remaining relation, his grandmother who raised him after both of his parents committed suicide, suffered from an abusive husband resulting in fear of men as well as agoraphobia.

Zosia is in a much better headspace than Tristan.  She was amputated at the knee some years earlier but with the love and strength of her now deceased mother, she has accepted the loss of her leg and learned to look past it.  This disability also enables her to look deep into Tristan and see the good man inside.  But she is also confined to her home by her patron, the king of England, which hinders her ability to fight for Polish nationalism and freedom in the face of Russian aggression.  The novel is set in 1829, a year before unsuccessful Polish uprisings.

I loved the sweep of the novel as a journey to Russia also occurs in the novel although I am not a fan of the device used to reunite the temporarily separated couple. The historical aspect was fantastic and I am now very interested in Polish and Russian history.  I mostly liked the characters although sometimes the angst over their self-mutilation and amputated leg annoyed me.  Tristan's grandmother and a Russian soldier Maksim, although not initially entirely sympathetic characters as they attempt to interfere in the romance, are given more sides to their personalities as the book progresses.

Overall: A darker and more intense romance than my usual fare with fascinating historical aspects.

Fun Fact: Had I been a boy, my parents were going to name me Tristan (Tristan Ryne Surname)

Cover: I feel like his hair looks weird but I love the way the sheets are billowing out.
Posted by The Insouciant Sophisticate at 12:01 AM