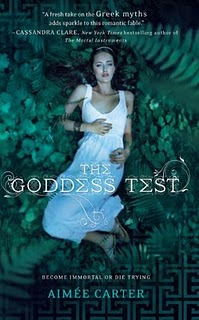 I was excited to see a book combining Greek mythology into YA literature.  The premise sounded promising too: Kate's mother is about to die but she makes a bargain with Henry (Hades) that she will attempt to become his queen in exchange for her mother's survival until Kate is ready to say goodbye.  I imagined something like the 12 labors of Hercules or something equally excited.  Alas disappointment.

The Greek mythology was very subtle.  The fourteen Olympians are represented but because they used other names and generally lacked personalities, I had trouble identifying more than half of them.  Much more could have been done to weave in the great stories of the Olympians.

Then there are Kate's tests.  They relate to the seven deadly sins, which is odd as that's associated with the Christian faith and would seem unrelated to the Greeks.  They also weren't very exciting, leading to a pretty monotonous story.

However I liked Henry and Kate's relationship; he is heartbroken from Persephone's leaving him but Kate does her best to cheer him up.  She also has friends in Ava and James, the former who plays more of a role in the story but James will probably appear more in the second book.

Cover: The colors are very beautiful and I like that Kate's dress is sort of Grecian.  I also like the title font.

Read for YA Debut Author Challenge and E-book challenge
Posted by The Insouciant Sophisticate at 12:01 AM