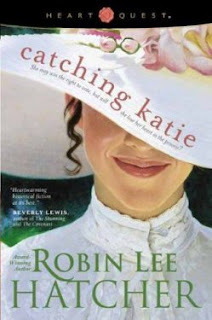 I was intrigued by the cover of this book as well as the description about a suffragist, Katie, working for a national suffrage amendment in conflict with her best friend, Ben, who loves her and just wants to be married with family.  At first I thought Ben would denigrate women's rights but he's actually supportive of national suffrage and Katie sharing her opinion.  He just wants her to choose a family with him (his dream) over a run for Congress (her dream). And that's where my problem was.  I liked both characters from the start and it was easy to support their friendship.  However their marriage comes about through less than ideal circumstances and it takes too long for them to reconcile (through very contrived means).  I was so frustrated that they married without trying to bring their different plans for the future more in sync.  While Ben outwardly supports Katie, he really wants her to stay at home and be his wife despite her long history of saying that marriage was not in the cards for her.  Both did need to listen to God more but their fights were repetitive and not engaging.

The other characters were fine.  Sophia is Ben's sister and Katie's return awakens Sophia's interest in suffrage and prompts her to make big changes in her life.  Blanche is the schoolteacher who just hates all men without exception and she ends up being the one to help Ben and Katie reconcile (entirely accidentally).  The debates that Katie provokes among the townspeople were great, even if sometimes they consisted of shouts that Katie needed to stay in the kitchen and get a husband.  It's weird to me to think that just one hundred years ago, not all American women were allowed to vote; I love being able to vote and I'm so grateful to women like Katie for fighting for that right for me.

Overall: My problems with Ben and Katie's relationship soured me on the romance but the historical and Christian aspects were good.

Cover: Adorable-especially with the title on the hat.
Posted by The Insouciant Sophisticate at 12:01 AM