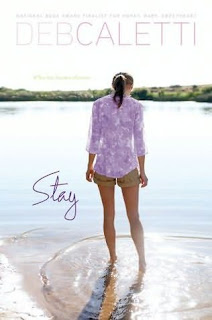 Source: Received a free egalley from GalleyGrab in exchange for an honest review.

Looking at the cover I wasn't sure that I'd read any Deb Caletti before until I glanced through goodreads to discover that I had in fact read two previous books and enjoyed them but it looks like the general cover design of her books has changed (if that makes no sense, look at her books on goodreads and notice the similarities between the covers of four of the books.)

I began the story somewhat confused as it is told in alternating chapters between past Clara and her relationship with Christian and present Clara and her attempts to get away from his emotional abuse and to heal herself.  Once I understood the format, though, it was smooth sailing.  I really appreciate a good contemporary with strong emphasis on the characters.  Clara, her writer-father, and Christian all had strong personalities that jumped off the page and drew me into their story.

See Clara and Christian saw each other across the room at a basketball game and it was like fate.  Soon they were an established couple but as the story unfolds, hints of Christian's jealousy and paranoia begin to flare up.  Watching their relationship build to this point and Clara's dawning realization that their relationship is inappropriate was engaging and made me grasp my book (or rather nook) all the more tighter.  Why do people stay in an abusive relationship? Well, Clara explains the many good times and the history she shared with Christian and it takes her a very long time to get away from his machinations.  Although I found him frightening, I was hooked.

However.  I found the other part less interesting.  Clara and her father have left their home for a beach town, telling everyone they're in Europe in order to escape Christian who had become increasingly intrusive and frightening to Clara. She and her widowed father embark on new romances and attempt to mourn the loss of Clara's mother, a character who overhangs the story despite her death.  I wasn't invested in the new romance for either character and I mostly read through those parts to see the inevitable return of Christian and the conclusion of their story.

There are also footnotes throughout the story that act as, usually humorous, asides from Clara to the reader.  I love that in a book (see my love of Terry Pratchett) and that helped lighten the overall mood of the book, which as you can tell is rather bleak at times. The story as a whole is also beautifully written and perfect for a long and lazy afternoon on the couch.

Warning: Language (the f-word) and using the Lord's name in vain; some sexual content but very discreet.

Recommended for fans of Caletti and Sarah Dessen and of darker contemporary YA. A gripping read.
Posted by The Insouciant Sophisticate at 12:01 AM