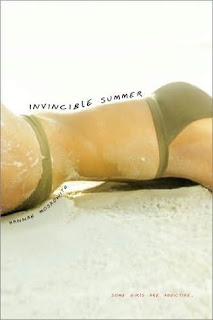 Source: Received a free e-ARC via GalleyGrab in exchange for an honest review.

I was conflicted about reading this book because the cover suggested somewhat trashy beach read while early reviews promised something deeper.  Throughout my reading, I continued to be conflicted.

The story is told over the course of four summers from the perspective of Chase, who turns 15 during the first summer.  He has an older brother Noah, a younger sister Claudia, a younger brother Gideon, and another sibling arriving in that time.  Their family is in disarray with Noah constantly leaving, Gideon deaf and unable to fully communicate with his family not fluent in ASL, and the parents fighting.  There's more but I won't spoil it.

Their next door neighbors, the Hathaways, have Melinda, who's a year older than Noah, and twins Bella and Shannon who are about the same age as Chase.  Bella is a ballerina and Shannon develops into a very college-obsessed boy.  The interactions between the children in the families (the Hathaway parents are barely mentioned) forms much of the conflict especially in the person of Melinda.  I did not like the triangle that develops between Melinda, Noah, and Chase (keep in mind Melinda is four years older than Chase).

I thought the idea of a story told over four consecutive summers would be really interesting (sort of like One Day) but I ended up struggling to reconnect with the characters after the changes that took place over the year.  Furthermore every summer seemed to have a crisis that made this book much bleaker than I had anticipated.  Despite the fact that time had passed in the book, I read this in about two sittings so it all hit me at once.

Oddly while I hated most of the plot points and didn't fully understand all of the characters, I enjoyed the writing.  I felt like the characters were family even as I felt like a bit of a stranger intruding on some of their most private moments.  Chase was a decent narrator and he seemed like a teenage boy (not that I really know what they're like). I did think there was too much swearing, especially as the book goes on but that's a personal preference.

I also experienced some confusion.  The first summer chronicled about two weeks but the other summers seemed to be longer.  How does that work? Are the parents going to their jobs while the kids stay there? Are the parents freelancers who can work from home? I think they're not supposed to be independently wealthy because some money worries are expressed but they must be pretty comfortable in order to be able to rent that beach house every year.

Then many of the characters memorize passages from French existentialist Albert Camus, which they attempt to quote at appropriate times.  I had to read The Stranger in school and thus I did not understand this fascination as I don't like Camus.  I mean, these characters were really into him. Is Camus really that popular?

Overall: Didn't really work for me due to character and plot. I would be interested in trying Moskowitz's debut Break.