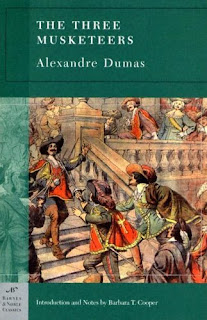 Summary: The classic adventure story of D'Artagnan, Porthos, Athos, and Aramis as they fight for king and queen against cardinalist forces and negotiate the battlefields of war and love.

This second part continues much the same as the first part with the 4 continuing their ways.  The focus this time is more on Milady, a mysterious lady who can switch between an English and French character, plots beyond the supposed capabilities of a woman, and is serving the cardinal in opposition to Queen Anne.  She was a fascinating character because of her ability to get men to do almost anything she wanted using anything that was at her disposal.  However she was morally unprincipled and was clearly a villain against D'Artagnan's heroism so she dies in a rather shocking way.

The 4 continue their spendthrift ways, acquiring and disposing of large sums of money fairly quickly, spending it on food, drink (especially drink), women, and gaming.  However Athos is deepened through his back-story, which is intimately connected with Milady's. I guess he would be my favorite although I still don't really like any of them.

The siege of La Rochelle, a Huguenot post in Catholic France,  forms most of the background and there were some clever scenes around that such as when the 4 hold a private discussion in a bastion and then manage to fight off a great horde of invaders through subterfuge and a bit of luck.

Additionally the trailer for a film adaptation later this year has been released.  Matthew MacFayden (aka a Mr. Darcy) plays Athos (my fave) but he also makes me think of Alan Rickman in appearance so that's kind of weird.  I'm sure I will see the film at some point although not necessarily in theaters.

Read as part of FITG Challenge.
Posted by The Insouciant Sophisticate at 7:00 AM