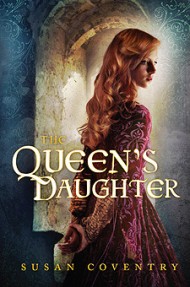 This is hardcore historical fiction; the reader is deeply immersed in the twelfth century following Princess Joan, daughter of King Henry II and Queen Eleanor of Aquitaine, sister of Richard the Lionhearted and John Lackland.  It's filled with the politics of the period as Joan struggles to be her mother's daughter, to survive in a brutal world, and to maybe find love.

I loved being steeped in this world, about which I know very little, and seeing a woman's perspective.  Obviously Joan is pretty privileged as royalty but she's forced into two marriages at the pleasure of her king and is tormented by her familial loyalties.  Her father and her brothers spent a lot of time fighting as did her parents; both parents used their children for manipulative purposes and the effects of that reverberate throughout Joan's life.

However while I loved the historical aspects, I didn't really like any of the characters.  Sometimes I was able to sympathize with Joan but other times I thought she was making a bad decision.  She is married off to William, King of Sicily and despises him as a weakling unlike her father and brother Richard.  She is attracted to Raymond, a prolific womanizer whose morals I found loathsome. The teachings of her mother permeate her mind despite her inability to always institute those sayings (for example that kindness is weakness, leading to her assessment of William).  But I also found Joan fairly compassionate and doing the best she could in difficult circumstances.

I did love Ermengarde unreservedly, a talkative woman who is sort of Joan's best friend although they are not always able to spend much time together.  Richard is a boorish overbearing conqueror and few other characters are in Joan's life long enough to really make an impression.  According to the author's note, Joan died when she was thirty-four but she certainly traveled a lot (England, France, Sicily, and the Holy Land) for that short life.

I also felt the book as a whole was somewhat unsympathetic to Eleanor, who has been immortalized in my mind as Katharine Hepburn and who I thus adore.  Admittedly the portrayal in the book is far more complex than Eleanor=bad, Henry=good.  Both are presented with their share of faults but I would have preferred a more pro-Eleanor perspective.  I guess I should search out some books that focus on Eleanor for that.

Cover: I love the cover! I think the rich colors and beautiful dress are very attractive.
Posted by The Insouciant Sophisticate at 12:01 AM