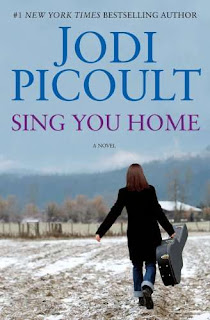 Summary: Zoe and Max have struggled with infertility problems for years but now Zoe is twenty-eight weeks pregnant and they feel like they're in the home stretch.  Until she goes into labor and delivers a stillborn son.  Still she has hope and three frozen embryos but Max is done.  He does not want to go through a sixth round and they divorce.
Zoe is devastated and seeks solace in a new friendship with Vanessa which turns to romance.  They get married in Massachusetts and then decide to use the remaining embryos to have a child.
Max meanwhile turned to his conservative brother and sister-in-law Reid and Liddy for a place to live while he relapses into alcoholism until a saving experience with Jesus. Consequently when Zoe needs his permission for the embryos, he's uncertain.  His pastor excitedly uses this opportunity to fan a big court case with media attention attacking gays and their destruction of the traditional family.

Okay, I know that's a long summary but I feel like it all had to be said before I get in to my thoughts.  I usually love Jodi Picoult's novels so I was psyched to get an advance peek at her latest. I didn't know anything about it going in and when I skimmed the summary on goodreads, I read it wrong believing that Zoe ended up wanting a family with the teenage girl she was helping.  Luckily that is not the case!

I really liked Zoe and Max but if I had to choose one of them, I'd pick Max despite him being a much more flawed person.  He's an alcoholic with several falls of the wagon over the course of the novel, he lusts after a married woman, and he's rather indecisive.  But I liked his conversion experience and his deepening understanding of God's character although I wish there had been more scripture than the few instances that refer to homosexuality. I also loved Liddy with whom Max interacts; she made me think of the actress Anna Camp who actually played a similar character on "True Blood."

Meanwhile I did not like Vanessa.  I don't know why.  She was very good at her job as a guidance counselor and their courtship (while much too whirlwind for my taste-about five months from falling in love and marriage to the court case) was sweet. Maybe it was how she and Zoe were incapable of tolerance while demanding it from the pastor?

I know I'm just a college student with a very different set of experiences from forty-year old Zoe and her struggle to get pregnant but I did not understand why she wouldn't adopt or later use Vanessa's eggs and find a sperm donor.  Why was it SO important to have a child with her DNA when the ending chapter demonstrated that family is not just about blood?  I've obviously never been in that position but I know that there are loads of children who would love to be adopted by such a loving person and I wish she had seriously considered that alternative, either with Max or with Vanessa.

One last comment: apparently the finished copy comes with a CD because Zoe is a music therapist and that plays a big role in the story.  My e-copy did not come with any music so I cannot comment on that.

SPOILERS from the LAST chapter: So Liddy and Reid got divorced? Or did Reid die? Cling more to the church while she moved away? Is no one Christian anymore? Because that makes me sad.

Overall: The presentation of Christians really lowered the rating for this book but I think most Picoult fans will be satisfied.
Posted by The Insouciant Sophisticate at 12:01 AM