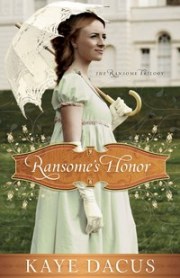 Kaye Dacus has been one of my favorite contemporary Christian romance writers so I thought it was high time to give her historicals a whirl by picking up the first in the Ransome trilogy.  I didn't like it as much as her contemporaries but it was an enjoyable story.

This is yet another book where young lovers separate and then reunite as adults.  In this case Julia had every expectation of receiving a proposal from her love William Ransome but no proposal comes, leaving her to conclude that he had only courted her so that he could ingratiate himself with her father, an Admiral, and thus further his own career.  Thus twelve years later, Julia is in no mood to spend any time with Ransome.  However her aunt is conspiring to force Julia to marry her cousin in order to save his estates from financial ruin.  In order to escape these pressures, Julia embarks on a business arrangement whereby she will marry Ransome, he will escort her to her family estate in Jamaica, and after a year the marriage will be annulled.  But Ransome does not want a marriage in name only, hoping instead for a true marriage in the eyes of God.

I really do hate reunited lovers stories (normally); in this case it is Ransome's pride although he prefers to call it honor that separates them.  He felt unworthy of her and didn't want to be a gold-digger after her 30,000 pounds.  Never mind the genuine love between them; he thought only of himself.  I wanted to see a lot more groveling on his part but the machinations of her aunt and cousin push Julia toward him.  In fact based on the official summary I thought their engagement would happen much earlier in the book than it does.

Both Julia and Ransome are honorable people with much respect from pretty much everyone.  They didn't have many interests.  His life is consumed by the Navy although he also seems the more faithful as his relationship with God is more in focus than hers.  She likes music and is a sound business manager.  I liked them-they seemed like good people-but they didn't fascinate or enthrall me in their story.

Her aunt and cousin are pretty stereotypical villains for Regency romance in my opinion.  The aunt looks down on Ransome for being in the navy instead of being a true gentleman (a baronet) like her son.  Never mind that Ransome is a sober-mannered, respected leader while her son is a dissolute broke womanizer.  The son also isn't very bright, relying on his mother's schemes to secure his fortune.

There are two really important secondary characters: Susan and Charlotte.  Susan is Julia's best friend, married to her own captain in the Navy and she is a total chatterbox.  I loved reading about her as I feel like she is the kind of person who just lights up a room and makes you feel at home.  Charlotte is Ransome's younger sister and foreshadowing in the book plus the summary of the second book shows that she will play a large part in the second book, Ransome's Crossing.  I didn't like her that much.  She's keeping secrets and that will provide much of the conflict in the later books.

Overall: Feels familiar and the main characters didn't pop for me. I will probably read the rest of the trilogy but I don't recommend it.

Cover: I feel like it's very typical for historical Christian fiction: woman in dress looking off into the distance.
Posted by The Insouciant Sophisticate at 12:01 AM