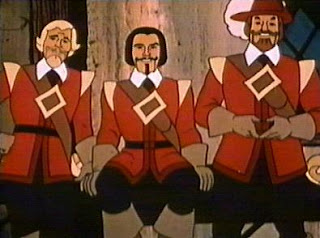 I don't know exactly where this picture is from other than an animated adaptation of The Three Musketeers. Readalong hosted by Allie at A Literary Odyssey.

This is a book I've wanted to read since loving The Count of Monte Cristo. I wasn't sure I'd be able to get this post up because as of March 12, I had not started the book.  Also on March 12, I discovered that I had food poisoning thus slowing me down.  However due to the amazingness of spring break, I am almost caught up and I have finished chapter 26 (the goal was to finish through chapter 29).  I believe I will have completed the book in time for the wrap-up post at the end of the month.

What I've seen so far are: some witty comments and some that are apparently supposed to be witty but that aren't to me; odd French political machinations (the 1600s are not my time period); men with short tempers, quick to duel; intertwining of British and French history; quite a few anachronisms as pointed out by my Barnes and Noble edition.  While I'm not finding it as engaging as Monte Cristo, which I thought had a slow beginning but those last 500 pages sped by!, I am mostly enjoying the book.

I'd always wondered why I would read four male names when the title clearly mentions only three.  Luckily an explanation is provided. D'Artagnan is a young man who would like to be a musketeer but must first serve a sort-of apprentice before he can join the ranks of Porthos, Athos, and Aramis.  Until that day though, they can still be companions and fight for the king and honor.  At this point in the book, the three had separated on a mission for the queen and now D'Artagnan is finding out what happened to them.

He is also worried about his love Constance, who has been abducted by Cardinal Richelieu's forces with the assistance of her husband. I am wondering what else will happen to propel the second half of the book along.  The cardinal must do something further that the musketeers and D'Artagnan will have to thwart but I'm not sure what he'll do.

Overall I am wondering a lot about the French politics of the time.  While I'm vaguely familiar with Richelieu, Louis XIII and his queen Anne of Austria are barely known to me.  Their counterpart is King Charles I (I much prefer to read about the Tudors and the Hanovers rather than the Stuarts) and his closest adviser, the duke of Buckingham, who is apparently in love with the queen.  I think some histories of the time would be very interesting although the story as it stands is pretty engaging.
Posted by The Insouciant Sophisticate at 7:00 AM