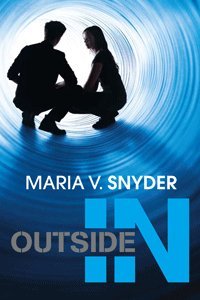 Outside In by Maria V. Snyder
Harlequin Teen, 2011
326 pages
YA
4/5 stars
Sequel to Inside Out-check out my review!

Summary: Now that Trella has helped overthrow the Inside leadership, a Committee of 19 uppers and scrubs has assumed control.  Yet the divisions are as defined as ever and unrest is growing.  When a threat from the Outside emerges, Trella has to unite everyone in order to overcome it.

I have attempted to write stories but I am always stymied by my unwillingness to put my beloved main character in danger; Maria V. Snyder does not have this problem.  In fact, she is remarkably clever at putting the main characters into repeated instances of danger (especially torture) as well as getting them out.  Every time I thought I could relax, Trella made a new move that thrust her in to danger.

Now I did think the beginning was a little slow, maybe because it's been a year since I read the first book and I had to re-acclimate myself to the world but once I was in, I could not stop reading!  I just wanted to know more, wanted to figure out how she could block the Outsiders (who by the way sound quite scary).  I would say that the story really gets going once Trella returns to the pipes; the demands of creating a new governing system had limited her time but I think we know that she belongs there!

Besides Trella, we get to spend more time with other characters from the first book.  I don't really like Riley, her love interest, because I thought he was a bit over-protective and demanding but I can see other people liking him.  I did love Logan, computer genius, who also ends up in some really bad situations.  And more time is spent with Dr. Lamont/Kiana Garrard, possibly Trella's mother (we do find out if she is) SPOILER: I think I liked her because she is in fact Trella's mother and her attempts to mother this very independent, opinionated, determined young woman whom she had betrayed grabbed my heartstrings.

I thought this book was brought to a solid conclusion and a fitting end to Trella's story; saying that, I would certainly read a third book if Snyder wrote one.

Read for ebook challenge.
Posted by The Insouciant Sophisticate at 12:01 AM