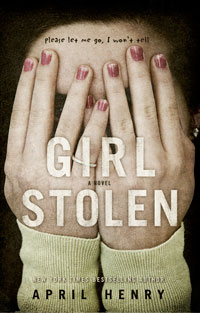 Summary: As Cheyenne rests in the car, Griffin breaks in and steals it without noticing her. She begs to be let go, but he's too far implicated to release her.  Upon discovery of her identity (the daughter of the president of Nike), Griffin's father has big plans for her.  Oh, yeah and she's blind.

This is another book that I probably wouldn't have read if not for the Contemps challenge.  I like sweet coming of age love stories, not boys implicated in their father's criminal activities and girls terrified out of their mind.  I am glad that I read it though.

It is quite fast-moving as Cheyenne adjusts to her new situation and almost immediately begins formulating an escape plan.  She was very brave and used what she had at her command to her advantage.  Tied in with Cheyenne is Griffin who wanted to boost a sweet ride and yet feels sympathy for Cheyenne especially in the face of his father's greed and his father's employees' lust.  He moves on a path toward redemption and escape from his father through their conversations and how she challenges him.

Overall: A very fast read that should have you on the edge of your seat.

Cover: I think the hands are creepy and that the cover as a whole definitely reflects the suspenseful nature of this read.

Read for Contemps Challenge.
Posted by The Insouciant Sophisticate at 12:01 AM