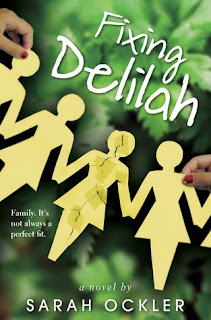 Summary: Eight years ago Delilah's mother, aunt, and grandmother had a big fight causing the daughters to never speak to their mother again and for them never to return to the idyllic summer cottage where the grandmother lives.  Then comes her death and the reunion of the three Hannaford women as Delilah attempts to unravel the secrets of that summer and of her family.

Thoughts: This is my first Sarah Ockler although I definitely want to read Twenty Boy Summer.  The first pleasing instance in this book was the discovery that there is a character named Stephanie...who is alas dead.  However I liked seeing a story that was focused on family.  Delilah and her mother used to be close but her mother's work takes up so much time that their relationship is highly fractured.  Plus as Delilah acts out, their inability to communicate drives them further apart.  The summer spent preparing for an estate sale at the grandmother's house helps patch up part but does not completely heal their relationship, which I found very realistic.

Less realistic (and less pleasing to me) was the romance between Delilah and Patrick.  Patrick and Delilah had been best friends all those years ago and they pick up their relationship and fall for each in a way that was almost too perfect.  He's a great guy and I highly approve of the nice not-creepy guy with his own ambitions who wants to support his love interest in her pursuits (whenever she figures them out) being featured as the love interest.  But the fact that eight years later he still thinks of her and misses her seemed unrealistic, especially due to their age difference (two/three years).  Are we to seriously believe there were no other girls around who might have turned his head?  Regardless I did like Patrick a lot.

One very important issue in the book is mental illness, specifically depression as Stephanie and Grandmother had it and dealt with it in their own ways.  I feel like that's such an important topic and so easily stigmatized in today's culture. I thought Ockler handled it well and gave the reader insight into that depression while also creating characters who had other facets to their personality.

I was so excited about the family secret that tore apart the family because I figured out what it was way before the official reveal.  Of course I also thought Delilah way overreacted; however that reaction is in character for her even as I saw her actions damage her relationship with her mother and with her sort-of boyfriend Patrick.

One slightly off-topic question: Patrick has amber eyes.  I feel like I've read quite a few YA books where the boy has amber eyes-why is that so popular? I don't want to insult anyone with amber eyes but what's wrong with brown? or blue? or (cause I'm a sucker for it) a freckled redhead with green eyes?

Read as part of the Contemps Challenge
Posted by The Insouciant Sophisticate at 12:01 AM