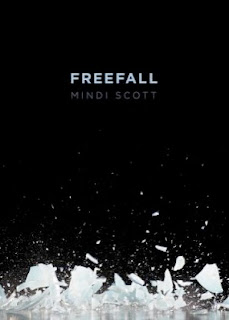 Summary: Seth's best friend died over the summer and he blames himself for not looking out for Isaac.  As he lives without feeling, he meets Rosetta, a beautiful rich brunette with her own grief.  Their shared class of Interpersonal Communications will greatly impact their lives and relationships.

Thoughts: I'm really grateful for the Contemps Challenge, which is the reason for me reading this book.  Unlike the books I usually read it features a male protagonist and has a mostly black cover, rather than something pretty and pink.

I was inclined to like Seth immediately as the death of his best friend Isaac seemed to have shaken him to his core.  His previous activities of pot, booze, and bass don't have quite the same appeal anymore.  Instead he drifts along in the wake of his older brother.  And then he meets Rosetta.  She lives in the wealthy part of time, far removed from Seth's family's trailer but they seem to connect.  On the first day of school, they discover that they're in the same new class Interpersonal Connections (IC) and the first activity they do helps them get a new start to the relationship.  Soon they're falling for each other but not with many a complication.

First Seth's in a band but he has crippling stage fright and thus never wants to perform.  This is a fear the IC class pushes him on.  Rosetta has a fear of her own that leads to some amazing scenes.  Second he thinks he hooked up with Isaac's ex-girlfriend and an old friend of his, Kendall.  The guilt for betraying his friend and shame for not being able to remember that night plague him.  Kendall was a tricky character for me.  At some points her motivations confused me and I hated when her relationship with Seth interrupted his relationship with Rosetta.  And third the rest of the school seems very aware of the social divide between Rosetta and Seth leading one character in particular to interfere.

I was so pleased to see Seth's metamorphosis.  Before he skipped school and abused drugs.  But he turns over a new leaf, working hard at his homework, actually attending classes, continuing to work at his job, and trying to be a better person.  That's exactly the kind of character development I love!  I didn't like Rosetta quite as much, just because we spend less time with her and most of her personality is filtered through Seth's perceptions so I feel like it's more than a little biased.

Warning: Language, underage drug-use and sexual content may make this book inappropriate for some readers. But the story is worth pushing past that!

Read for Contemps Challenge.
Posted by The Insouciant Sophisticate at 12:01 AM