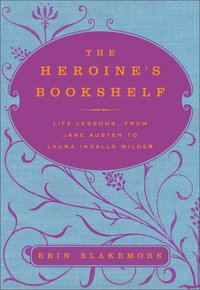 Erin Blakemore examines twelve beloved heroines and their authors for inspiration for life.  It had been my understanding that the focus would be more on the heroines themselves but instead Blakemore also examines the lives of the authors and how their experiences shaped the characters in their novels.  I enjoyed almost all of the essays except for the first which is about Elizabeth Bennet.  I'm not sure why that one didn't click for me (because it's my favorite novel and although I don't know everything about it, I did know everything presented in this essay?) but in general it does seem as if the novels I didn't know as well had better essays.  This book also made me want to reread To Kill a Mockingbird, which is a good thing because that's such a great book but also a bad thing because I have a big pile of library and review books to get through.


Overall: A cute little book (it is smaller than a regular hardback); perfect for the lifelong (probably female) bibliophile; I would recommend you check it out from the library.
Posted by The Insouciant Sophisticate at 12:01 AM